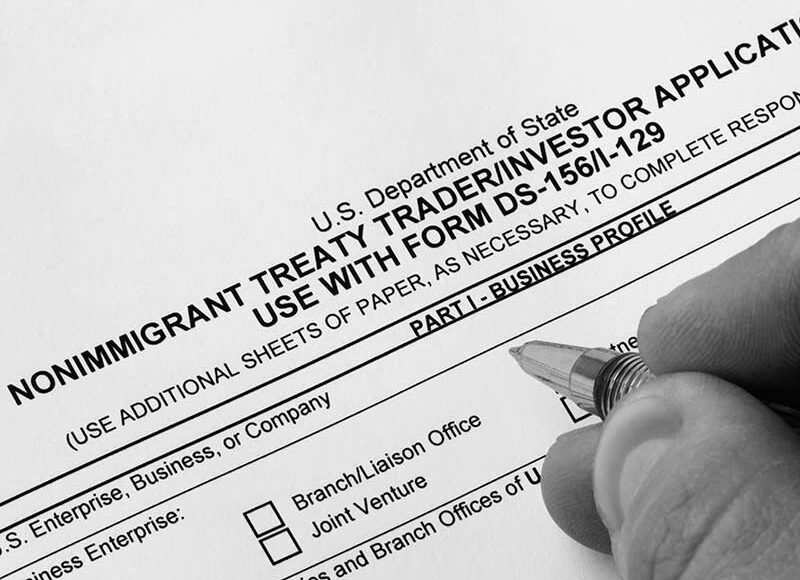 Treaty Trader (E-1) and Treaty Investor (E-2) visas are for citizens of countries with which the United States maintains treaties of commerce and navigation. South Korea is one of these countries.

To qualify for Treaty Trader (E-1) and Treaty Investor (E-2) visas applicants must be coming to the United States either to engage in substantial trade, including trade-in service or technology, in qualifying activities, which is principally between the United States and the treaty country, or to develop and direct the operation of an enterprise in which the applicant has invested a substantial amount of capital. Holders of E visas must intend to depart the United States upon the termination of their E status.

The spouse and unmarried children (under 21 years of age) of treaty traders, treaty investors, or employees of enterprises may receive dependent E visas in order to accompany or follow to join their spouse or parent. They are not required to have the same nationality as the principal applicant to obtain an E visa.

General Qualifications for a Treaty Trader

“The existing international exchange of items of trade for consideration between the United States and the treaty country.”

This includes, but is not limited to, trade in goods, services, international banking, insurance, tourism, technology and its transfer, and so forth. Generally, trade involves a steady flow of trade items, through numerous transactions over time. The monetary value of transactions is considered, but greater importance is placed on conducting a greater number of transactions, with great overall value.

General Qualifications for the Employee of a Treaty Trader

Employees of 1) an alien holding an E-1 Treaty Trader visa, or a 2) qualifying enterprise or organization may also qualify for an E-1 visa.

To qualify for an E-1 visa as the employee of an individual treaty trader, an alien must meet set specifications:

The alien must be of the same nationality as the alien employer (thus, both being of the nationality of the treaty country);
The alien must meet the legal definition of an employee, i.e. an “individual who provides services or labor for an employer for wages or other remuneration”; and,
The alien must be engaged in executive or supervisory duties, or, if the alien does not meet that requirement they must be employed in a capacity that requires specific qualifications. Specific qualifications are defined by USCIS as specialized skills that make the employee essential to the functioning of the trade. As such, these skills can vary, but often include:
Proven degree of expertise in the specific trade area
Possession of unique skills related to the trade which others do not have
Ability to command a certain salary level based on these skills

Certain family members of treaty traders and employees may also accompany the E-1 visa holder as dependents. An E-1 visa holder may be accompanied or followed by spouses and unmarried children who are under 21 years of age.  Notably, their nationalities do not need to be the same as that of the treaty trader or employee.